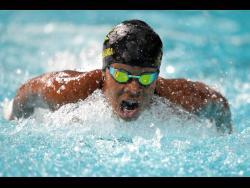 Multiple national squash champion Christopher Binnie will set off today in search of his second victory at the 2022 Commonwealth Games in Birmingham, England.

Binnie will face India’s Ramit Tandon in the Round of 16 tournament starting at 6:30 a.m. Jamaican time.

Nine-time Caribbean champion Binnie got off to a winning start to the tournament yesterday when he beat Ghana’s Evans Ayih 11-1, 11-1, 11-3 to register a 3-0 win.

However, the event’s other Jamaican competitor, Julian Morrison, was ousted from the competition after losing 5-11, 4-11, 3-11 (0-3) to Pakistan’s Nasir Iqbal in the 64th final.

The Jamaican badminton team will be hoping for their first win of the tournament when they take on Zambia today at 8am Jamaican time.

The Jamaicans suffered two defeats on the opening day of the Championships yesterday after losing 3-2 to South Africa and 5-0 to Asian powerhouses Malaysia.

Meanwhile, after suffering back-to-back defeats yesterday, the Jamaican rugby sevens team will be hoping for better luck today when they face Uganda in their third game of the tournament.

The Jamaicans were outscored 62-0 by Australia in their opener before losing 45-0 to Kenya in their second encounter.

Meanwhile, in swimming, no Jamaican made it past the first lap. In the 100 backstroke, Keanan Dols won his heat in 57.80 seconds but his time wasn’t fast enough to advance. Nathaniel Thomas finished fourth in his heat in 1:00.27.

Zaneta Alvaranga and Kelsie Leigh Campbell also failed to progress in the women’s 100m butterfly after finishing 26th and 27th overall respectively. Alvaranga was third in the second run in 1:03.02 while Campbell was eighth in the fifth run in 1:04.32.

Mackenzie Headley also failed to advance in the women’s 50-metre breaststroke after finishing seventh in heat three in 33.85. The event was won by Australian Chelsea Hodges in 30.66.

Want a once-in-a-lifetime experience? Head to Iran during Muharram