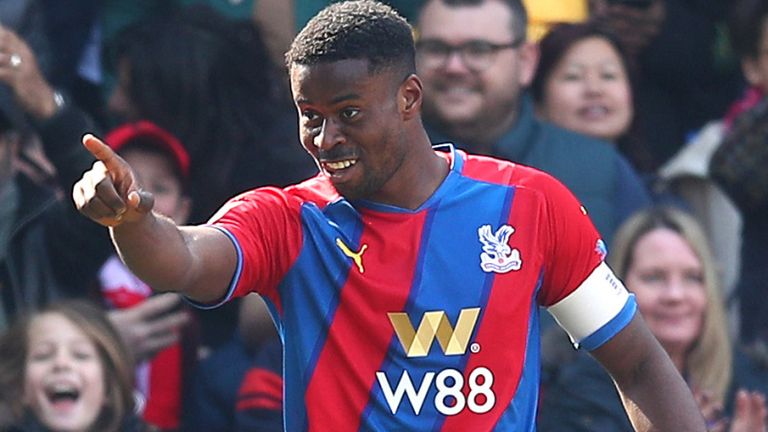 Crystal Palace produced a fine attacking performance to beat Everton 4-0 to secure a place in the FA Cup semi-finals at Wembley.

Marc Guehi, called up for the first time in Gareth Southgate’s England team at the start of the week, headed Michael Olise’s corner for the opener (25), then Jean-Philippe Mateta is converted on the cut-back of Wilfried Zaha (41).

Palace, FA Cup runners-up in 2016, narrowly beaten by Manchester United in extra time, continued to dominate Everton in the second half with Zaha (79) and substitute Will Hughes (87) extending their lead from close range. finishes.

Relegation-threatened Everton came into the game after a 1-0 win over Newcastle in the Premier League on Thursday, but those efforts appeared to take their toll in sunny south London as they rarely threatened after a bright start. .

Palace, on the other hand, offered plenty of excitement with Olise, Eberechi Eze, Zaha and Conor Gallagher named in the same starting line-up for the first time, with the young quartet keeping home fans dreaming of glory. Wembley.

Man of the match: Wilfried Zaha.

How Palace got into the last four

But an injury to former Palace man Andros Townsend, who had to be helped from the pitch after twisting his knee in the 13th minute, appeared to tip the momentum in Palace’s favour.

Guehi’s goal came after Olise’s initial corner nearly caught Jordan Pickford, Everton’s returning keeper needing to hit him over the crossbar, and Palace nearly doubled their lead when Zaha sent a reduction of Mateta in the side net.

Richarlison then fended off a chance to equalize when he fired straight at Jack Butland from Seamus Coleman’s diagonal ball over the top and that squandered opportunity was punished when Palace drove through Everton shortly after, Mateta converting after that ‘Eze released Zaha on the left.

Mateta had the chance to add a third shortly before the break, when he held onto a header from Eze, who only shone on his fourth start of the season, but Seamus Coleman made a great recovery tackle before he could shoot.

The third goal came in bizarre circumstances after Olise failed to connect properly with a shot, sending it looping over Pickford’s far post, where Zaha reacted fastest to slide the ball in at home.

Demarai Gray was the only Everton player who looked dangerous at the other end, once sending a low shot from just outside the box, but substitute Hughes sparked wilder celebrations from home fans when he returned the ball home after Gallagher’s low shot. well saved.

Wilfried Zaha Recount ITV Sports: “It’s amazing. Obviously it’s crazy that this is the first year the team has played together and you can already see the progress.

“I think over time, when the team solidifies more, there will be more to come.”

Marc Guehi added: “It was a bit of a nervous start on my part but I think we responded well by being resilient, defending well and making sure that during this period we didn’t concede.

“Luckily we didn’t and we continued to have a good performance.

“It’s a fantastic feeling to go to Wembley. We’ve achieved a lot this season and we’re looking forward to this game.”