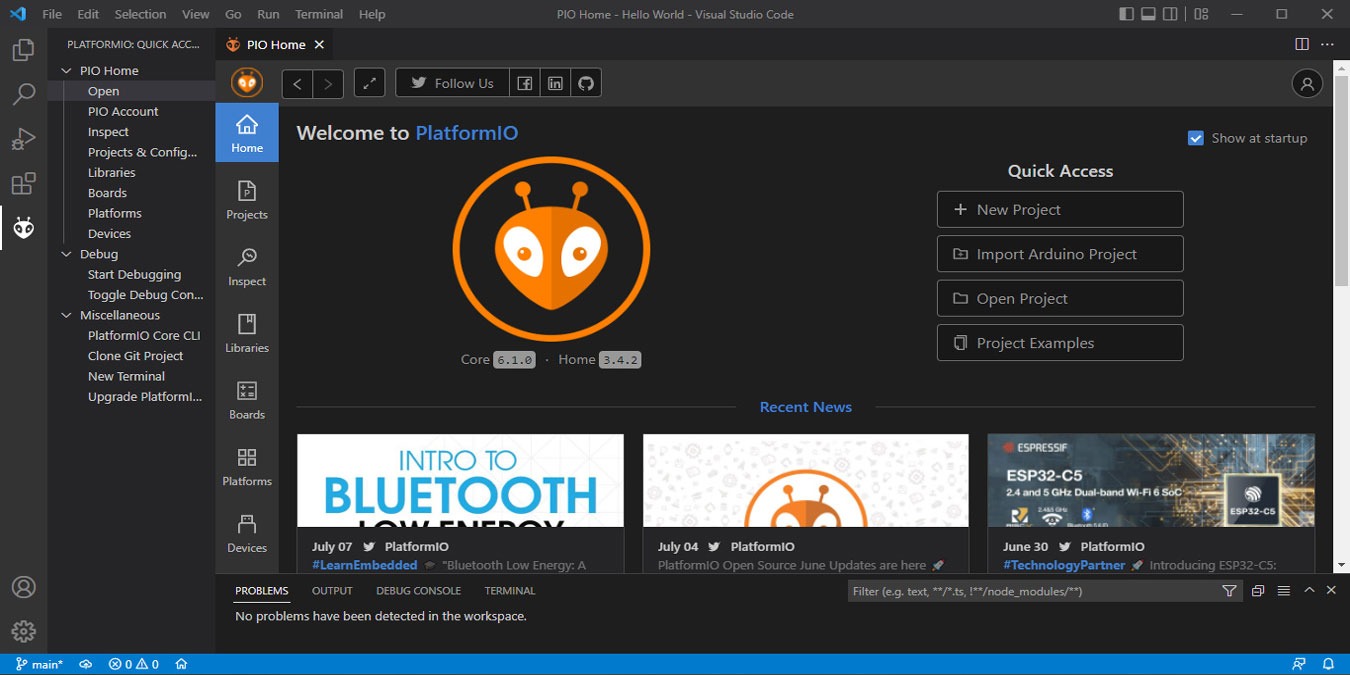 How to program Arduino through Visual Studio Code using PlatformIO

Sometimes coding on the Arduino IDE just isn’t enough. Think of all the tools it lacks: no spell checker, no folders, no autocomplete. Of course, you could just program Arduino on an editor and then paste it into the IDE before uploading it. But PlatformIO lets you do that without having to switch windows at all.

Read also :10 Useful Lines in Python You Need to Know

PlatformIO is an extension for Visual Studio Code that lets you run and debug code for embedded systems. It currently supports 1,395 development boards from all sorts of manufacturers, allowing you to use it for more than the Arduino.

Comparing PlatformIO to the Arduino IDE might sound more like a “use it and you’ll know” sort of thing. In my opinion, it’s definitely better because you can add more features to it, like better C/C++ linters, autocomplete, and even MicroPython support. It also supports Git, which is good if you’re working on a team.

Compared to the Arduino IDE, coding with PlatformIO requires a few extra steps. For this example, we’ll use an Arduino Uno and flash its internal LED.

Find where to code

You should be ready to program your Arduino after pressing this button. To start coding, you have to go to “src -> main.cpp”. This opens a file with the following code:

Sound familiar? This is what appears on the Arduino IDE as soon as you open it. There is only one difference: it is written #include at line 1.

The reason is simple. You are coding in pure C++ now. PlatformIO shows all the hidden things you never see using the Arduino programming language. This is also why you can see all these new folders on the left. They are there for you to do things.

On the other hand, the Arduino IDE only allows you to program Arduino boards with the Arduino programming language, which is based on C++.

That done, let’s flash the internal LED of the Arduino!

5 questions to help you learn the basics of programming

Like in the Arduino IDE, PlatformIO allows you to build or build and upload your Arduino program to your board. In the blue bar under Visual Studio Code, you should see a checkmark and an arrow next to the house icon.

The next two buttons let you delete the current saved version (trash can icon) from your computer and do a unit test (flask icon) on your board.

With that out of the way, your Arduino’s onboard LED should start blinking once per second. If you really want to see it working on an external LED, you should try putting an LED and a 250 Ω resistor between pin 13 and GND in series.

An IDE for embedded systems is not an IDE if it does not have a serial monitor. Tap the plug icon to open the serial monitor. This will open a new terminal process that will show you everything your board wants to tell you.

In this case, our Blink code should make the Arduino say “One cycle of LEDs on and off” to the serial monitor after each blink cycle.

6 of the Best Raspberry Pi Alternatives

How do you remove PlatformIO from Visual Code Studio?

Like any other extension, you just need to go to the Extensions tab in the left tray area, click on PlatformIO IDE, and then click on the uninstall button.

Is there a point in having separate Build and Upload buttons?

Although it might seem redundant at first, having a Build button that doesn’t download code anywhere helps a lot when experimenting with some C++ features that you’re not sure would work on an embedded system. Ultimately, it depends on your use case. This, and early debugging, helps eliminate many unwanted long-term bugs.

Can I use PlatformIO for commercial purposes?

Slightly longer answer: you can program Arduino and many other boards with PlatformIO for your business. But they also offer an in-house IDE solution for businesses in PIO Labs.

Was this article helpful?

Our latest tutorials delivered straight to your inbox