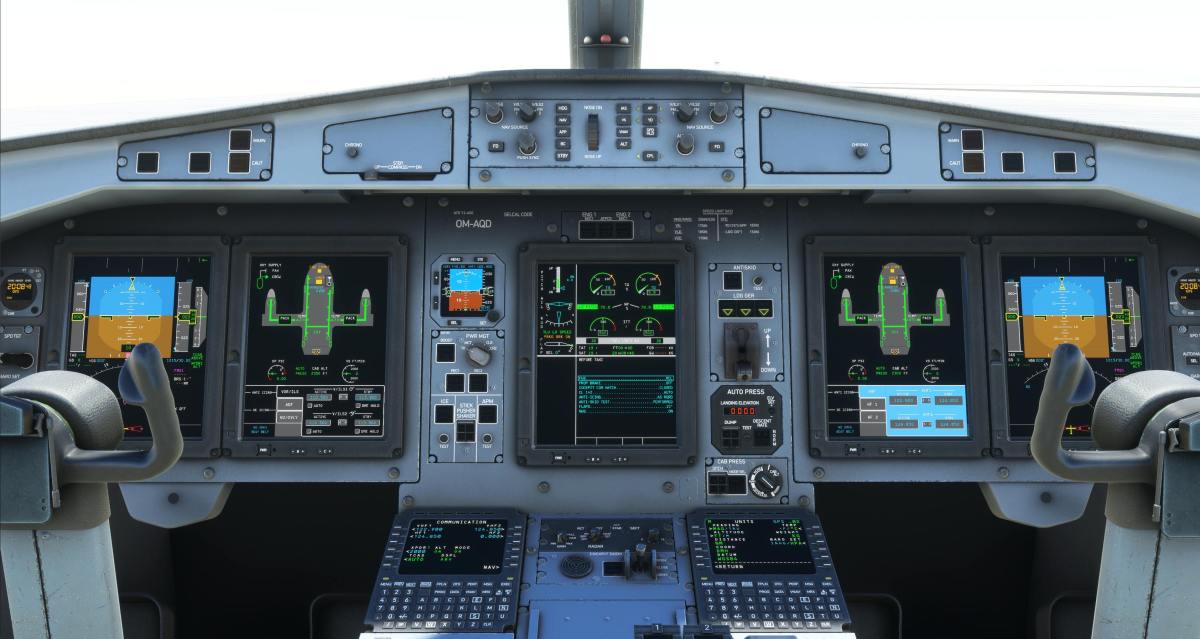 Milviz hosted a live stream with many updates on its products.

The ATR project is progressing rapidly and will be “absolutely at study level”. It will feature icing, wear, wipers, failures and more than 10 ATR pilots are currently actively testing it.

While there’s no release date yet to be announced, it should be coming “soon”.

The ATR 72 and the ATR 42 are being manufactured and there are also plans to create the cargo versions. At the moment, the developer is not ready to announce whether they will be released at the same time or not.

The audio is recorded by Simacoustics from a real aircraft and the two FMSs operate separately.

It is currently drivable internally, the screen is working, and LNAV and VNAV are also already working. The flight profile is currently close to what the developers want it to be.

Below you can check out some screenshots of the cockpit instruments.

A Northrop T-38C Talon has been teased, and you can check out a look here first. The developers aren’t ready to talk about it yet.

The SR-71 Blackbird is 80% complete. It will be the pilot’s only plane, which means the back seat will not be functional, but there will be some kind of system that will make it work.

The model overhaul is complete and the developers are starting to do the painting. You can verify an overview of the cockpit here.

The Pilatus Porter Stage 2 is almost complete and should be ready in 3-4 weeks with a release before the end of September.

It’s pretty much complete inside but the devs want to include more releases. It will have standard tires, tundra tires and amphibious floats. You can see it in action here.

As you may already know, the de Havilland Canada DHC-2 Beaver was sold to Microsoft for the 40th Anniversary Edition, so it will be free as part of that. It’s 99% done so far.

The tension knobs on the throttle assembly work and it will have standard tires and amphibious floats. It will also include an EFB tablet with options.

A paint kit will be provided, and Milviz is still discussing with Microsoft whether they will be able to release add-ons. You can see it in action here.

The working model on the de Havilland Canada DHC-3 Otter and Turbo Otter is nearly complete and Milviz hopes to have them out in six months.

Moving on to the UH-1H Huey, there are no plans to make the D or C versions, but the UH-1N Twin Huey is planned. The panel will vibrate and it will have non-working weapons and a civilian version.

It should be out “soon enough” and you can check it here.

Speaking of the Boeing 737-200, the coding is in progress and the 3D model is being redone.

Nolinor Aviation provided the team with full access to a real aircraft. The developers do not yet know if it will have a glass cockpit. They are 60-70% convinced that there will be a universal UNS-1 FMS.

It is also learned that the A-1H Skyraider project has been sold to another company, and Milviz is waiting for said company to release him.

The F-86 Saber project has advanced and is currently approximately 70% complete.

The F-4 Phantom arrives. It will be a different version of the one made by another developer, and it will provide the same level of simulation as that of P3D.

The C-130 Hercules is still under study but not confirmed. Right now we’re working on it for the military, and we can’t get that version.

We got the announcement that Milviz will be releasing Beale Air Force Base (KBAB), and it will include two versions, the old SR-71 Blackbird version and the contemporary version. You can see the latter here.

Incidentally, the consumer branch of Milviz will change its name and the new name is tentatively Blackbird Simulations. This should happen over the next 6-8 weeks and you can see the current logo prototype below.

We also get an update by Fsdreamteam, which released a stunning video of its highly anticipated GSX ground services add-on. We learn that it will be released this month (August 2022).

The video presents the add-on charging the Airbus A320 by Fenix.

Last but not least, MSK production announced that Jinnah International Airport (OPKC) in Karachi, Pakistan is set to be released with only a few bugs to fix. You can check out some screenshots below.

Recently we published our latest interview with Microsoft Flight Simulator lead Jorg Neumann and heard more about Microsoft’s plans for the next few months, including World Update Australia.

If you want to know more about the game itself, you can read our review which will tell you everything you need to know about the game from Asobo Studio.