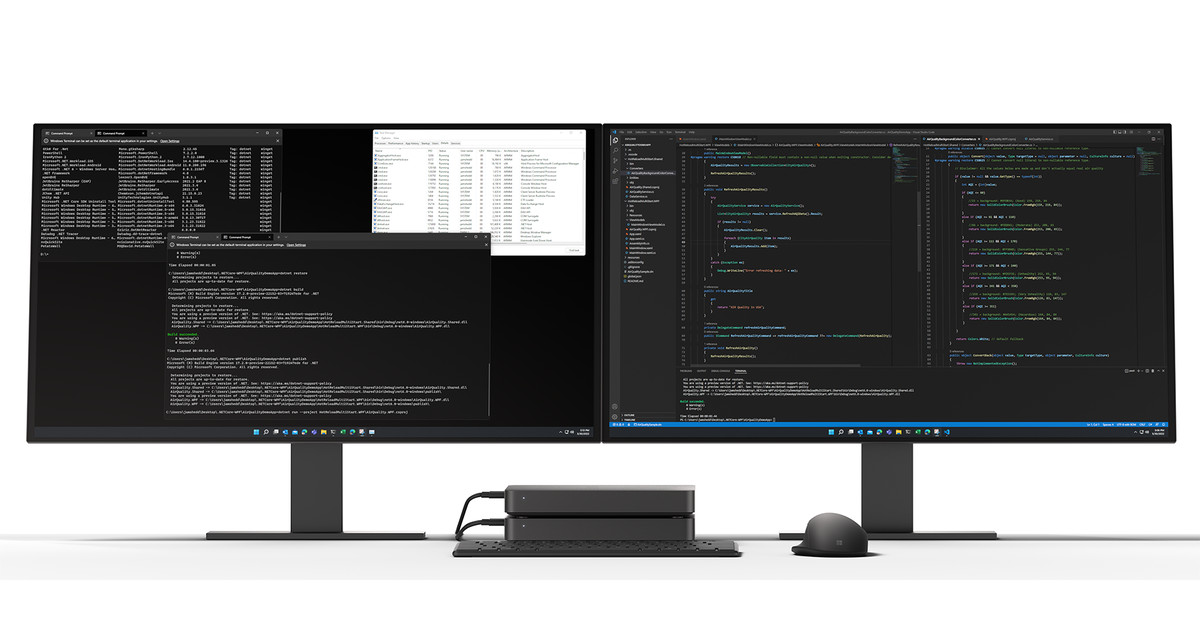 While Arm devices like the Surface Pro X were able to run Visual Studio through x64 emulation, some features were not supported and performance suffered as well. Developers will certainly be intrigued to learn more about native Arm support for Visual Studio 2022 and VS Code, and Microsoft is creating what it describes as an “Arm native toolchain”:

Along with this Arm-native push, Microsoft has again partnered with Qualcomm to create an Arm-powered development device. The Volterra project uses a Snapdragon processor and neural processing unit (NPU) to enable developers to build cloud-native AI applications.

The device itself looks like a Mac Mini-like PC, and it has a stackable design so developers can stack multiple Project Volterra PCs on their desks or inside server racks. Microsoft isn’t revealing the exact specs yet, but Project Volterra has three rear USB ports, along with a DisplayPort and Ethernet port. There are also two USB-C ports on the side of the device, and the device is made from recycled ocean plastic.

Microsoft partnered with Qualcomm last year at its Build developer conference to create an Arm-based development kit for developers to build native Arm64 apps for Windows. Despite that, we’re still waiting to see more Arm-powered Windows devices and apps. Many developers rely on the Arm64 emulation built into Windows to allow consumers and businesses to run their applications, and without a larger install base of Arm devices, that’s unlikely to change.

Microsoft is also opening its Microsoft Store at Build today. The company removed the waitlist for win32 apps, opening the store to all app developers. We’ve seen a slew of desktop apps appear on the Microsoft Store alongside the launch of Windows 11, and dropping the waitlist should mean we’ll see even more appear in the months to come.