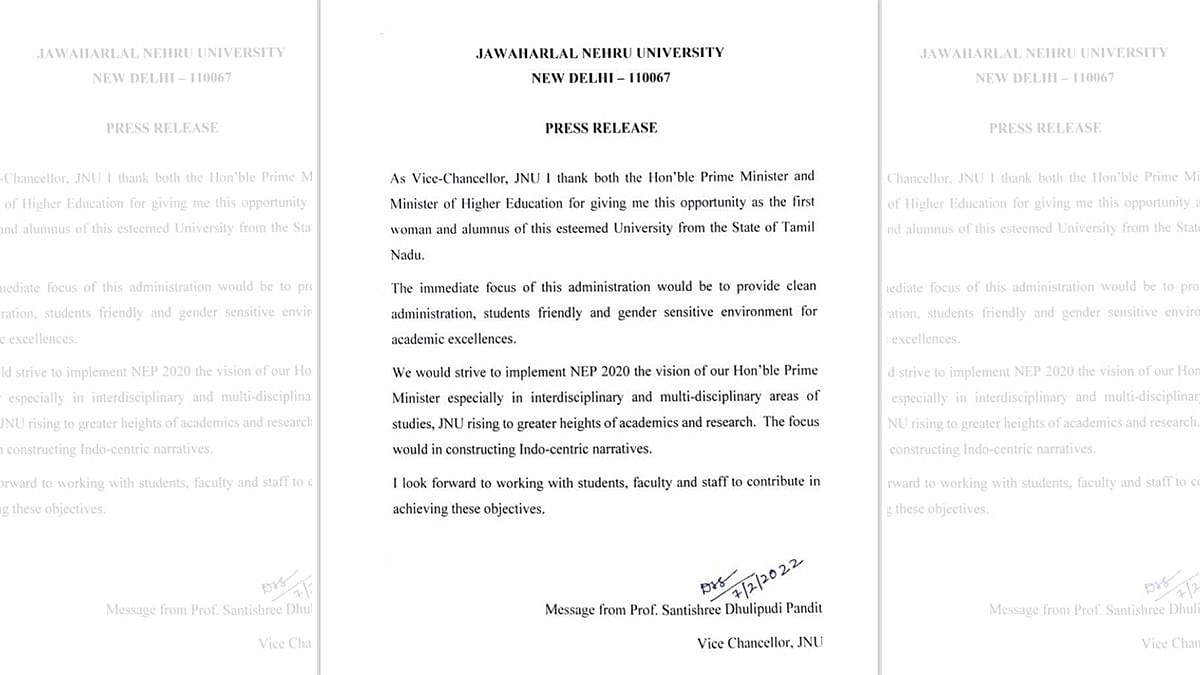 New Delhi: The new vice-chancellor Santishree Dhulipudi Pandit of Jawaharlal Nehru University (JNU) is currently under intense scrutiny from academic and political elites. After a row over her alleged past tweets, she has now courted further controversy over her English skills.

In a press release on Monday after being named VC, Santishree thanked Prime Minister Narendra Modi and presented him with the agenda as head of the institute. But his statement drew criticism over several grammatical errors, including phrases such as “student friends” and missing articles.

“This new JNU VC press release is an exposition of illiteracy, littered with grammatical errors (would strive against would strive; sympathetic students against students; excellences against excellence). Such poor appointments harm our human capital and to our young future,” he said.

This press release from the new JNU VC is an exposition of illiteracy, peppered with grammatical errors (would strive vs would strive; sympathetic students vs students; excellences vs excellence). Such poor appointments harm our human capital and the future of our young people pic.twitter.com/tSanmy3VfR

Speaking to ThePrint about his tweets, Gandhi said: “With few tertiary institutions at par with global standards, India needs to have the right leaders to shape the course of universities that are likely to succeed. . As such, appointing someone who has little to offer in terms of academic vision, credentials, or even ability to communicate is a path to long-term mediocrity and illiteracy for our human capital.

“We need leaders, with the right values ​​and discipline – not those who can’t do basic due diligence in their first press release about their appointment. A large institution like JNU needs empathy, sensitivity and careful leadership, not loudmouths with little verbal control. College degrees and past experience, not retweets, should be the selection criteria.

Other academics and leading figures also joined in and criticized her statement regarding poor language skills.

I wonder how many countries appoint people who have trouble stringing together two grammatical sentences as the head of one of their major universities. And in how many of these nations does part of the population applaud the choice? #JNU https://t.co/9IGlrgnbDr

Message from the new JNU VC:

The slaughter of the English language that unites all right-handers.

The best way to kill an institution is to hire a mediocre, sycophantic administrator. This press release from the new JNU VC tells us everything you need to know about the quality of this meeting. If you can’t build institutions, at least don’t destroy those built by others. pic.twitter.com/fPr9CTpWZ5

ThePrint reached out to a spokesperson for JNU and Pandit for comment on this line via texts, but there was no response up to the time of this report’s publication.

In her statement, Central University’s first female VC, said her administration would provide a “student-friendly and gender-sensitive” environment for academic research. She also said the focus would be on building “Indocentric narratives”.

Also, although it mentioned the Prime Minister, some Twitter users pointed out that the statement did not express gratitude to the President, who is the final authority for such appointments.

The new JNU VC forgets to thank the appointing authority, the President of India. He h. pic.twitter.com/N2tv6DRGIU

The language skills line is just the latest controversy surrounding this nomination.

On Monday, just hours after she was named VC, Pandit’s Twitter account, which was filled with “hateful” tweets, came under scrutiny and was later deleted. However, he could not be confirmed if that was his profile.

Many Twitter users shared old tweets made from the “@SantishreeD” handle in support of the ruling BJP and its IT cell leader, Amit Malviya.

Is this person a pedagogue or a two rupee troll?
Or does the government believe there is no difference between the two? https://t.co/Imo92hJTPB

According to her biography on the University of Pune website, she is fluent in Telugu, Tamil, Marathi, Hindi, Sanskrit, and English, and can understand Kannada, Malayalam, and Konkani.

She is herself a political scientist and former student of the JNU. According to his biography, after graduating and postgraduate studies at the Presidential College, Chennai, Pandit pursued his masters and doctoral studies in international relations at JNU. His doctoral dissertation topic was “Parliament and Foreign Policy in India – The Nehru Years”.

With contributions from Neelam Pandey.